Discover how West Coast Fever generated a 91% brand recall rate for their sponsor with Komo Digital's Live Trivia. Read our case study to be inspired!

To achieve this, West Coast Fever used Komo’s platform to engage their audience with an in-game digital activation held at three quarter time. Fans competed in a game of Live Trivia to test their knowledge about the team among an audience of members to stand a chance to win a grand prize of $2,500 in cash. 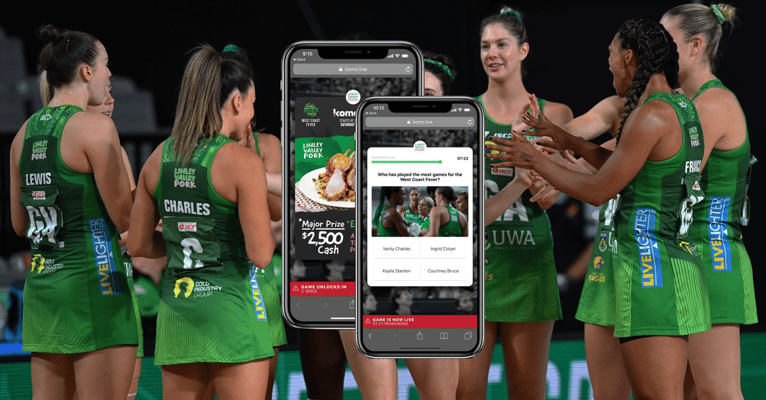 Of the 5,484 in attendance, a total of 976 attendees registered to participate in the Live Trivia game (18% activation rate). Most significantly, participants of the digital activation reported a 90% user satisfaction rate. Linley Valley Pork also achieved a sponsor recall rate of 91%, indicating the strong positive effect the Live Trivia game had on their brand awareness.

West Coast Fever is an Australian netball club based in Perth, Western Australia. The team plays its home games at Perth Arena, and have participated in numerous championships since its inception such as the Suncorp Super Netball league, the ANZ Championship, and the Commonwealth Bank Trophy.

“We are thrilled with the results of our recent Komo Live activation; our match day sponsor, Linley Valley Pork, received a 91% sponsor recall rate at the match and I believe the activation had a lot to do with that result.”

I’ve thoroughly enjoyed working with the team at Komo. They are efficient, professional and great fun too, looking forward to working with them again in the future.” - Lauren Movick, Partnerships Manager of Netball WA

Discover how Murdoch University engaged 30% of its live audience with Komo Digital's Live Trivia. Read about our case study today and be inspired!

Optus used Komo's Digital Coupons feature to give their Optus Perks members a seamless and convenient experience when redeeming their offers.

Foxtel Media produced a successful engagement campaign during the Bathurst 1000 race with a 245% CTR on ads. Find out how we did it at our Komo...