Learn How Basketball Forever TRIPLED Their Email Database In 5-weeks

The Chicago Bulls were back in the limelight due to the popularity of Netflix’ Michael Jordan documentary ‘The Last Dance’. Piggybacking on this interest Basketball Forever created a weekly game of Live Trivia to find their biggest Chicago Bulls fan. Each week the highest scoring fan won UberEats vouchers. Every participant was directed to the Tissot website upon game completion to match them with their perfect watch. 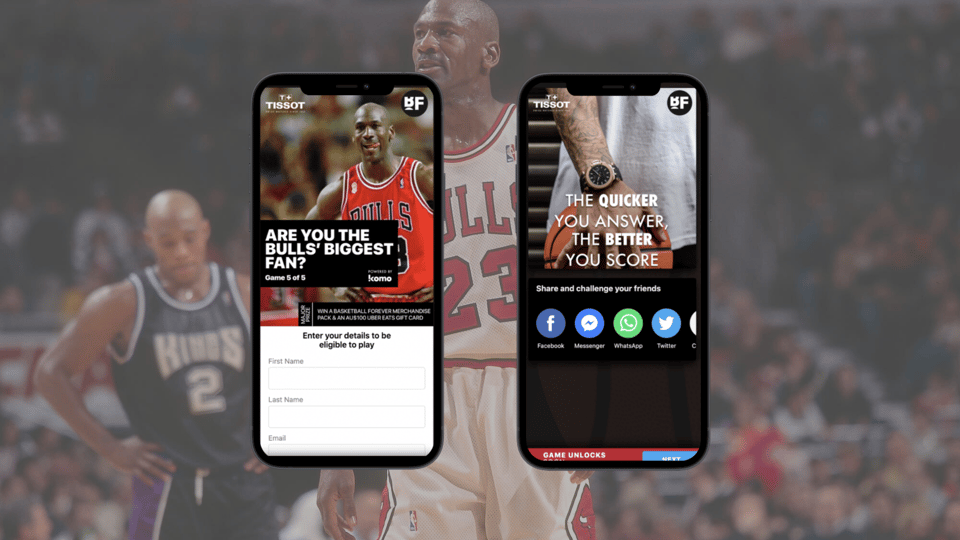 "We partnered with Komo to run a 5-week campaign around Michael Jordan's Last Dance Documentary. We more than tripled our EDM database, and the campaign reached over 3.5m people across our social channels. Komo's UX is seamless and integrated perfectly to both our, and our sponsors' brand, we look forward to working with them again." - Jaden Harris, Co-Founder

"Initially I was sceptical and felt that sponsor specific questions within our 'The Last Dance' Michael Jordan game on Komo would be received negatively by our audience. In fact, the response has been the opposite. The value this has delivered to our partnering sponsor has far exceeded our expectations. The data has been very informative, and the opt-in numbers are off the charts." - Rob Bergin, Commercial Director

Founded in 2011, Basketball Forever is the largest basketball publisher on Facebook with over 3-million global followers. They’re a part of the Forever Network which are a social-first media company redefining media experiences at the intersection of sports and culture on the platforms where young people spend most of their time.

Discover how Murdoch University engaged 30% of its live audience with Komo Digital's Live Trivia. Read about our case study today and be inspired!

Discover how West Coast Fever generated a 91% brand recall rate for their sponsor with Komo Digital's Live Trivia. Read our case study to be inspired!